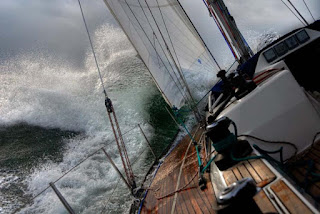 In the previous chapter of the Gospel of Luke, Jesus gave a warning about His Second Coming and the desperate times that would accompany that great event. Now He begins the next set of instructions to His disciples with these words:

And he spake a parable unto them to this end, that men ought always to pray, and not to faint;
--Luke 18:1

The parable that followed this pronouncement about praying always concerns a bereft widow and an unjust judge. Though the town judge initially paid no attention to the importuning widow, because she continued to pester him, the judge finally acceded to her request for help. Jesus concludes this parable with the promise the God will hear us, "though he bear long with" us, meaning that we may have to be patient until the Lord sees fit to answer us in His own due time.

Returning to Jesus's introduction to the parable, to "not faint" is to not lose heart. God hears all prayers, but He answers in His own due time. When answers don't come quickly or easily, we may think God isn't listening or He doesn't care. Such is not the case. God always hears, always cares, and always answers. His answers, however, are always calculated for our maximum benefit. Despite what we may want, God knows what we truly need. He gives us what we need, which may not be what we want. Sometimes the most important thing we need, amidst all our wants, is a lesson in patience.

For most of my life, I have been quite adept at instructing God in how He should run His universe and the timing of the blessings I think I need in my life and in the lives of others. I tell Him who to heal and when to heal them, who to strengthen and how He should strengthen them, whose burdens He should lift and how He should lift them. I have approached God like my personal vending machine of blessings, dropped in my coins of prayer and faith, pushed the buttons, and expected instant gratification.

Has God heard all my selfish, self-centered, impatient prayers? Absolutely. Does He love me? Positively. Does He want me to have a good life? Most assuredly. But He is also wise enough to withhold the blessings I want and dispense the blessings I need. He is patient enough to let me learn His purposes despite my frantic desires to have Him right every wrong and heal every illness and remove every burden.

I has taken me many years, but I have stopped, for the most part, trying to instruct God in how I want Him to fix the world and have instead offered to listen to what He wants for me, to bear up the burdens He wants me to carry, to deal with the obstacles He allows to obstruct my easy path, to serve those on whom He has chosen to allow afflictions to linger, and to wait patiently with an eye of faith for the things I truly need. God's goodness is not in a comfortable life with no drama, no problems, and no stress, but in permitting all the trials that will enable me to come to the Savior with a broken heart and contrite spirit. My purpose in this earthly life is not to be comfortable on a calm sea, but to the strong in the midst of the storms that blow my vessel towards the promised land of salvation and exaltation.

Posted by David Armstrong at 10:51 AM No comments: 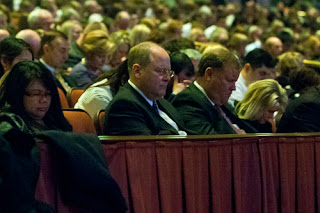 Jesus is up against it now. The scribes and Pharisees come at him with guns ablazing to trip him up and find a fault they can use to discredit him among the common people. His miraculous healings have drawn considerable attention, the latest being the healing of a leper. The doctors of the law have come from all over to watch and observe and then to criticize.

A man suffering from a long-time paralysis is brought to Jesus. Knowing His enemies are present, Jesus administers to the man first by telling him his sins are given. Jesus's statement has its calculated effect, driving the Pharisees into an angry frenzy. "Who can forgive sins but God alone," they mutter. Jesus responds by asking, "Which is harder to do, forgive a man's sins or heal a man's illness. But just so you know I have authority from God—" Jesus then removes the paralysis, and the man walks away.

The Pharisees next encounter Jesus enjoying himself at a feast to which tax collectors and other social outcasts have been invited. The detractors are afraid to approach Jesus directly because He has bested them at every turn. So, they jump on the disciples. "Does your master know he is eating with sinners?" Jesus hears the accusation and is quick to reply, "They that are whole need not a physician; but they that are sick."

Unable to deflect the confrontation with Jesus directly, they address their next accusation to Him. They cleverly maneuver their criticism, however, to reflect on Jesus's disciples rather than on the Master himself:

I assume to make a prayer means to prayer together, and probably in public or in prayer meetings. The point of this complaint by the Lord's detractors is that He and His disciples do not hold regular fast and prayer meetings. And it is true that the New Testament provides practically no accounts of Jesus and His disciples praying together, other than the instructional Lord's Prayer and the great Intercessory Prayer.

Jesus certainly prayed often but usually alone. Nevertheless, He did not condemn group prayer, but it was apparently not necessary while He was among his disciples, or at least He did not intend to make a public display of it.

On another occasion, He taught:

My prayers, likewise, are a private matter between me and my God. I participate in open prayers, as in Church meetings and family prayers in my home. But when I really want to talk to God, I want to be alone with Him. 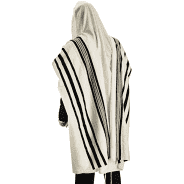 Prayer is an intimate expression. An Israelite placed the prayer shawl, or Tallit, over his head and drew it around his face to pray. The closed shawl became his personal closet, drawing the Lord so close as to place God's ear next to the man's mouth. "From my lips to God's ears" is a common Jewish expression. It indicates the closeness into which we draw to the Lord when we are in our prayer closet.

I testify our Heavenly Father wants us to approach Him and come close to Him. We are each His child, an individual whom He knows and loves. He wants to hear from us, one on one, directly, personally, privately. I look forward each day to my closet time with my Father.

Posted by David Armstrong at 11:56 AM No comments:

Pray and Watch to Be Prepared 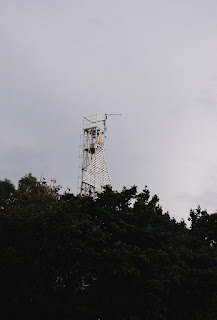 During the last week of His mortal life, Jesus and the disciples spent much time in the temple where He gave some of His most powerful sermons. On a particular day, while they moved about the temple, the disciples marveled at the magnificence of the building and the riches it contained. Jesus took the opportunity to prophesy to the disciples about the coming destruction of the temple and the signs that would precede His return to the earth.

After describing the calamities and dire events that would precede His Second Coming, Jesus gave this counsel to His disciples in His day, which applies to those of us who strive to be His disciples in our day:

Watch ye therefore, and pray always, that ye may be accounted worthy to escape all these things that shall come to pass, and to stand before the Son of man.
--Luke 21:36

Prayer and watchfulness prepare us for the coming of Christ. We watch for signs, and we watch ourselves. We do not want His coming to sneak up on us out of ignorance or because we are blinded and numbed by sin.

In our prayers we can ask for help in our preparations. If we truly pray with real intent, "Thy kingdom come, Thy will be done," we will be open to the whispering of the Holy Ghost, and we will see His coming, even while He is yet a great way off. If we pray for strength to defeat Satan and overcome the natural man, the Lord will gird us with truth and soften our hearts so the Spirit can penetrate us and change us and prepare us for all things.

Prayer increases our watchfulness, and diligent watching always brings us back to prayer.

Posted by David Armstrong at 11:42 AM No comments:

David Armstrong
I am a convert to the Church of Jesus Christ of Latter-day Saints. I was educated as a teacher, made my living as a software developer and project manager, and in the past few years have begun to unleash my pent-up passion of writing. Expressing my love for Heavenly Father, Jesus Christ, and their words in the scriptures has become an exciting adventure for me and a powerful way to be a voice for good in the world.